The Gardiner Museum is pleased to present a three-part installation by Yoko Ono entitled THE RIVERBED. Yoko Ono is a forerunner of Conceptual art, frequently involving collaboration, audience participation, and social activism in her artwork. The exhibition runs from February 22 to June 3, 2018.

Consisting of three parts—Stone Piece, Line Piece, and Mend Piece—visitors are encouraged to shape the installation through collaboration with the artist, the museum, and each other. Since the 1950s, audience participation has been a key aspect of Ono’s practice, and is at the heart of THE RIVERBED, conceived, in a sense, as a temporary village; a repository of hopes and dreams for individuals and for the world. 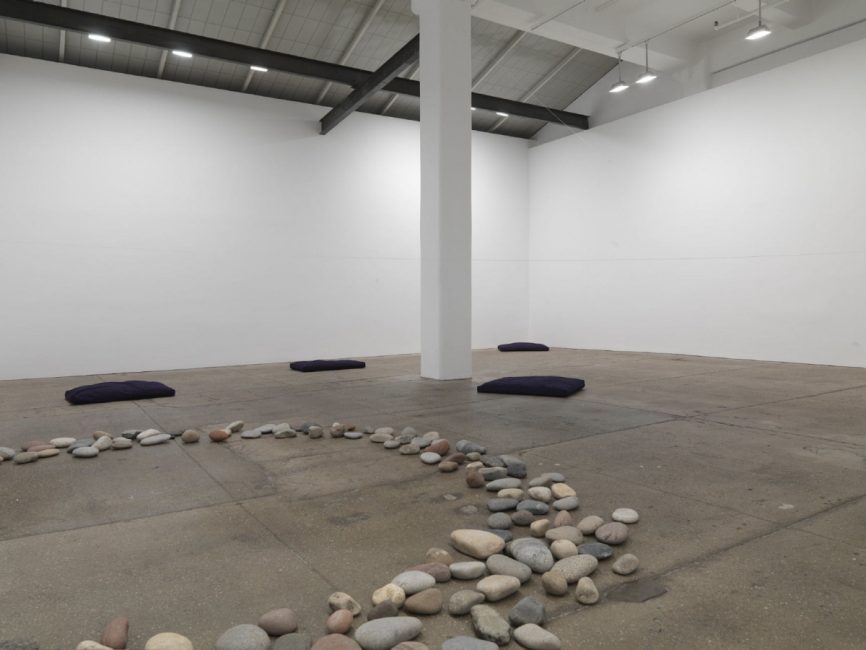 Stone Piece features river stones that have been honed and shaped by water over time. Ono has inscribed some of the stones with words such as dream, wish, and remember. Visitors are invited pick up a stone and hold it, concentrating on the word and letting go of their anger or fear.

Line Piece is comprised of a series of low tables with notebooks in which visitors are encouraged by Ono to “draw a line to take me to the farthest place in our planet.” Visitors may also extend a string across the gallery space using hammers and nails to secure it from one point or another, creating a web that will grow and evolve over the course of the exhibition.

In Mend Piece, a work first created by Ono in 1966, fragments of broken ceramic cups and saucers are placed on tables for visitors to reassemble using glue, string, and tape, before displaying them on shelves around an all-white room. In Ono’s words: “As you mend the cup, mending that is needed elsewhere in the Universe gets done as well. Be aware of it as you mend.” [1]

The space also features a small coffee bar where visitors are encouraged to enjoy a cup of coffee together, forming another kind of union.

“The Gardiner is excited to share Yoko Ono’s groundbreaking participatory work. THE RIVERBED offers visitors a rare opportunity to engage in the hands-on shaping of the exhibition, and to collaborate as a creative community. This is particularly fitting given the tactility and humanness of clay and ceramics,” says Chief Curator Meredith Chilton.

“Yoko Ono is an international icon and cultural pioneer who merges film, music, visual arts, and peace activism in innovative ways that continue to serve as a model for contemporary artists working across disciplines, including ceramics,” says Kelvin Browne, Gardiner Museum Executive Director and CEO.

The exhibition is presented through the generous sponsorship of Partners in Art, a group of volunteers and art supporters with an interest in promoting contemporary arts within Canada and internationally.

“Partners in Art is thrilled to be presenting Yoko Ono: THE RIVERBED, continuing our tradition of supporting iconic and important women artists at the Gardiner Museum,” says Jennifer Morton, Co-President of Partners in Art. Partners in Art was also the Presenting Sponsors for Clare Twomey: Piece by Piece, the acclaimed British ceramist’s first solo exhibition in Canada.

Yoko Ono: THE RIVERBED was first mounted at Galerie Lelong & Co. and Andrea Rosen Gallery in New York City in 2015.