Sources at Holt Renfrew say that the Bloor Street Saint Laurent boutique is expected to carry ready-to-wear as well as accessories. The space is quite large, taking over much of the west side of Holt’s ground floor that was, until recently, stocked with menswear. Holt’s men’s offerings have all been relocated to its dedicated 16,500 square foot men’s store, a block west at 100 Bloor Street West.

Saint Laurent has expanded its presence in Canada significantly over the past 15 months, having opened two boutiques, as well as a concession at Nordstrom in Vancouver. Saint Laurent opened its first standalone store in Canada in Vancouver at 746 Thurlow Street in July of 2016, spanning two floors and with 4,800 square feet of retail space. A second location at Toronto’s Yorkdale Shopping Centre, spanning 3,000 square feet on one level, opened in November of 2016. The company also recently amplified its Vancouver offerings with the addition of a new leased accessories boutique at Nordstrom in Vancouver’s CF Pacific Centreflagship, replacing a retailer-operated hard-shop that opened with Nordstrom in September of 2015. 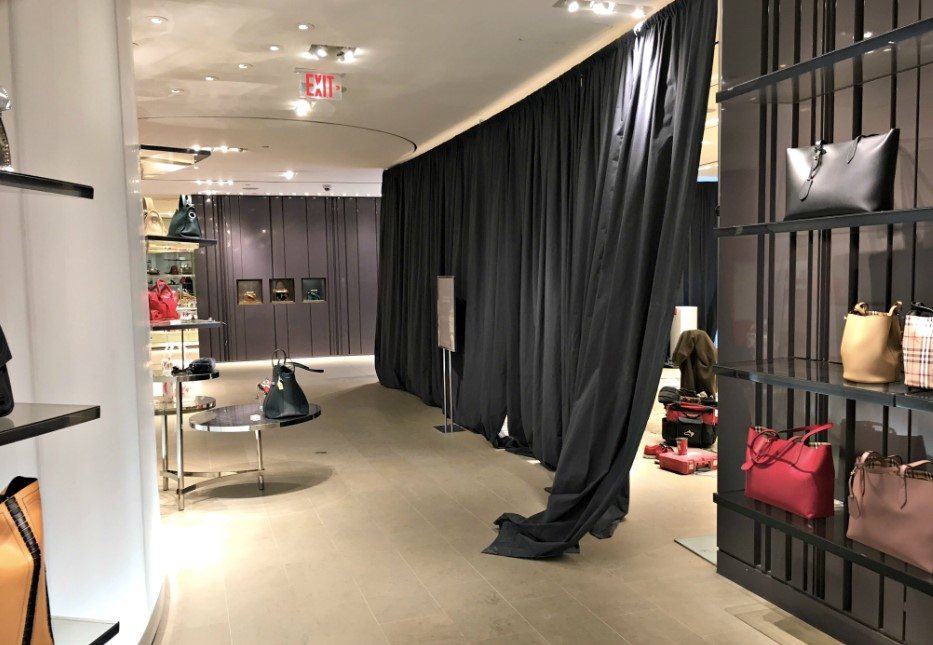 (UNDER WRAPS: A NEW LORO PIANA ACCESSORIES BOUTIQUE WILL BE OPENING SOON ON THE GROUND FLOOR OF HOLT’S AT 50 BLOOR STREET WEST. LORO PIANA ALSO RECENTLY OPENED A CONCESSION AT HOLT’S YORKDALE AND, SOON, IN VANCOUVER. PHOTO: CRAIG PATTERSON)Saint Laurent’s new Bloor Street frontage will add an extra element of luxury to the part of the street between Yonge Street and Bay Street, which is undergoing unprecedented changes at a cost of hundreds of millions of dollars. On the south side of the block, the Manulife Centre is undergoing a podium transformation that will add new retailers, including a 50,000 square foot three-level Eataly (opening in early 2019) as well as an overhauled Birks jewellery store flagship. The Yonge-Bay stretch of Bloor Street West isn’t considered to be as luxury-focused as the stretch towards Avenue Road, generally — though Birks’ new store, which will feature street-front entrances for pricey shop-in-stores such as Van Cleef & Arpels and Breitling, will add an extra element of luxury to compliment Saint Laurent across the street.

Holt Renfrew’s 50 Bloor Street West flagship is about to undergo a substantial renovation that will include the addition of several luxury brand concessions on its ground floor. A Loro Piana boutique is currently under construction on the east side of the floor near the store’s Prada and Miu Miu boutiques, and management from Celine were said to be in town this week to determine what they can do in terms of opening a substantial concession at Holt’s on Bloor, as well. Part of Holt’s new strategy appears to be to include multiple luxury branded concessions in its stores, creating a clustering that will attract wealthy clients to the store’s other departments and services. Upstairs on the second floor, as well, Brunello Cucinelli recently unveiled a bright, large women’s concession in retail space once occupied by Giorgio Armani and Tom Ford, and a Moncler boutique is under construction next to it. More changes will be on the way for the second level, as well, when Chanel relocates its expanded offerings to a massive new flagship that will open this fall at 100 Yorkville Avenue, though Chanel will also continue to retain a presence at Holt’s.

Luxury brands with street-facing entrances isn’t a new thing for Holt Renfrew — at one time, Giorgio Armani had a ground level boutique at Holt’s on Bloor, with access directly from the street. Last year, Chanel opened a 5,000 square foot street-level concession at Holt Renfrew in Vancouver that faces onto Dunsmuir Street, though it is only accessed from within the department store. In Montreal, as well, Holt’s features Sherbrooke Street West-facing retail spaces for Dior, Hermes and Gucci — though that will eventually change when Holt’s closes that store to merge with nearby Ogilvy. Sources confirm that the new Ogilvy will feature a number of large luxury brand concessions, with Chanel and others occupying large spaces on the store’s revamped ground floor.
Post Views: 3,685
Share on facebook
Share on twitter
Share on linkedin
PrevPreviousBLOOR-YORKVILLE SHINES BRIGHT FOR HOLIDAY MAGIC
NextBloor-Yorkville and Bloor Street BIAs AGM – November 8thNext