TD TORONTO JAZZ FESTIVAL TRANSFORMS BLOOR-YORKVILLE INTO A SANCTUARY OF SOUL AND JAZZ WITH FREE PERFORMANCES!

A gifted songwriter and singer, Macy Gray has been playing by her own rules since kicking off her musical career with her debut in 1999 and the smash hit “I Try.”

Dividing his time as a saxophonist with Bruce Springsteen’s E Street Band, singer-songwriter Jake Clemons also tours the world with his own music. He brings his latest solo project to the Festival stage in support of his album Fear & Love.

Gospel royalty Cece Winans is a 10-time GRAMMY winner who has continued to impact gospel and R&B throughout her 35+ year career.

Opening night of the Festival, Friday, June 22, brings a special edition of Friday Night Live at the Royal Ontario Museum (ROM), where guests can travel through generations of jazz as the museum is transformed into a jazz club. Performances include Clairmont The Second backed by live jazz band JAZZ MONEY; jazz-influenced electronic music of Anomalie; dance group Holla Jazz as they take guests through the paces with steps such as the Charleston, apple jacks and stomps; Angela Turone Trio; Jesse Barksdale Trio; Woodshed Orchestra; and a whole host of DJs that will keep the museum swinging.

The lineup on opening weekend also includes a ticketed performance by jill-of-all-trades, psychonaut and Renaissance womyan, Maylee Todd accompanied by producer and keyboardist Kyvita. Maylee has been called many things, but her music is consistently described as stimulating.

On Saturday, June 30, the Festival will be collaborating with CBC Music to pay tribute to the JUNO Awards.  Eight shows, four on each of the Cumberland and Hazelton stages, feature past JUNO nominees and winners – some of Canada’s best musicians.  Performances by the Shirantha Beddage Quartet, Autorickshaw, the Brandi Disterheft Quartet, Okavango Orchestra, the Allison Au Quartet, the Mike Downes Quartet, New Tradition Music and Hilario Duran’s “Contumbao”.

Performing at the Cumberland Stage

Shirantha Beddage Quartet – Saturday, June 30, 12:30
From Toronto, Shirantha is a music composer, educator and baritone saxophonist. He will be joined by a number of Toronto musicians, playing compositions that reflects Shirantha’s childhood fascination with the physical sciences.

Comprised of Suba Sankaran, Dylan Bell and Ed Hanley, they’ve been described as modern jazz, meeting funk and folk with pop-music from India. A truly international sound, they’ve toured extensively across Canada, the U.S., the U.K., Europe, India and Nepal.

Performing at the Hazelton Stage

Allison Au – Saturday, June 30, 12:00
Fresh from Toronto’s jazz landscape, Allison Au is a captivating local saxophonist whose tone and unique musicianship sets her apart from her colleagues. She will be joined by the rest of her Quartet at the Festival, performing elements of modern jazz.

Mike Downes (Quartet) – Saturday, June 30, 2:30
Mike Downes is a bassist and composer, exciting audiences globally since the early ‘80s. His latest project Root Structure has been called “one of the most intriguing and innovative small group jazz recordings of the year.”

Ruben ‘Beny’ Esguerra is a Colombian born multi-instrumentalist, spoken-word lyricist and arts educator. He leads the New Tradition big band, originally created to supplement international artists with some of the most desired jazz musicians in Toronto.

Hilario Duran – Saturday, June 30, 8:00
Hilario Duran is a Cuban-Canadian pianist, composer and educator, widely regarded as one of the world’s most innovative creators of Afro-Cuban music & Latin jazz. His vigorous playing, diverse musical influences and his commitment to the sounds of his culture set him apart from his contemporaries. 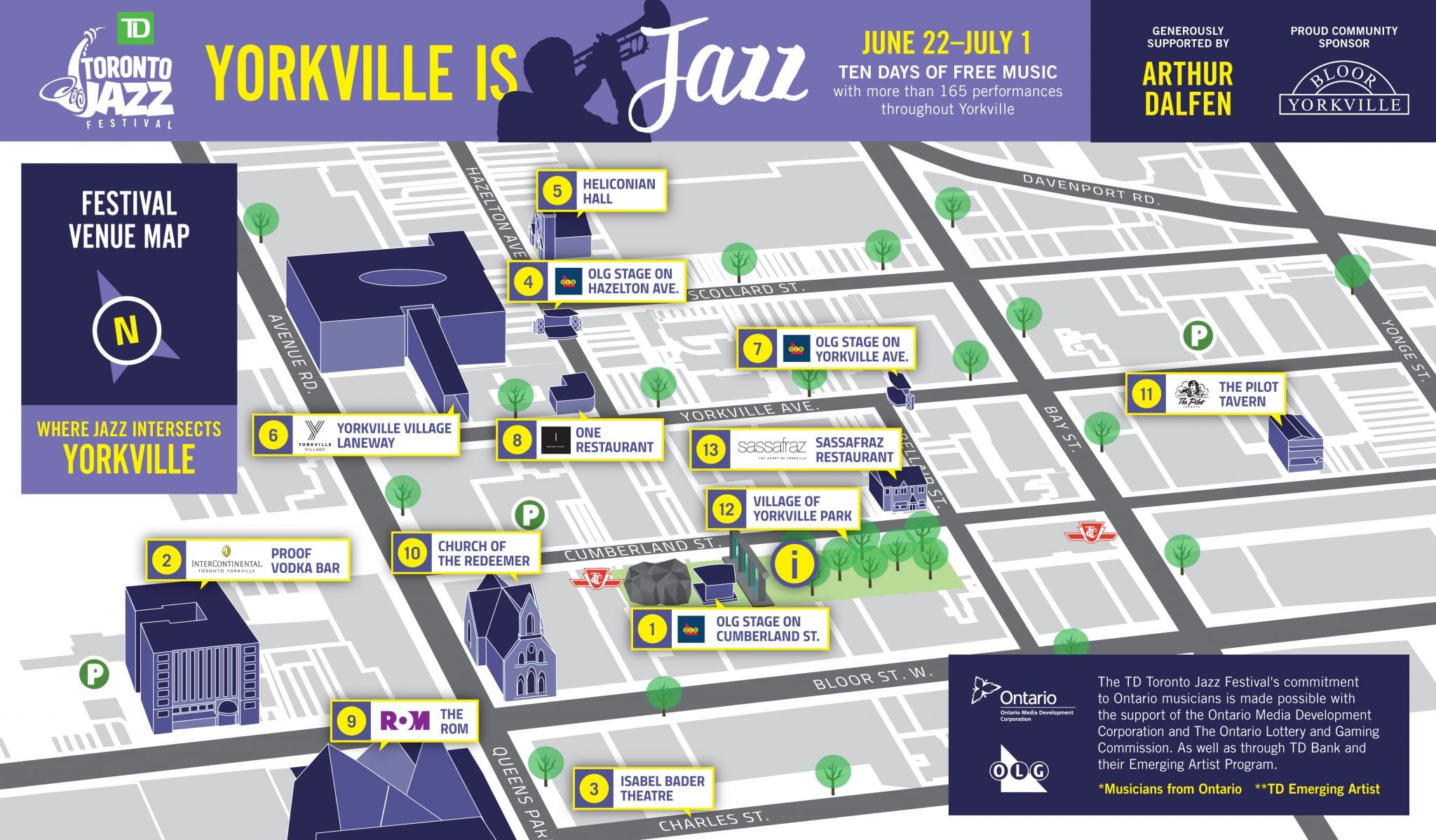 The music continues throughout the Festival with over 165 free shows spread across Bloor-Yorkville at locations including the OLG Stage on Cumberland St., OLG Stage on Yorkville Ave., OLG Stage on Hazelton Ave., Isabel Bader Theatre, The Village of Yorkville Park, Heliconian Hall, Church of The Redeemer, Hotel InterContinental, ONE Restaurant, Sassafraz and Yorkville Village – The Lane.