The Best Walking Tour in Toronto: Your Bloor-Yorkville Guide

If architecture, history, and evolution of cityscapes piques your interest, we have a few suggestions for embarking on your own walking tour of the Bloor-Yorkville area. Upon first inspection, it may seem an area bustling with new developments, which is true (there’s never a dull moment on Bloor Street), but amidst all of the new are the old, making for a unique juxtaposition of sights and aesthetics. As rich in history as it is in beauty,  a walking tour of Bloor-Yorkville is always a good idea. The below free walking tour includes a few examples of some of the best historic sites, in the area, featuring a wide range of rare architecture and fascinating history.

What is now the charming Chanel flagship, centrally located on Yorkville Ave, was once known as Mount Sanai Hospital. The brick facade was once part of the original structure built in 1922 to provide services to Toronto’s Jewish community. This interesting piece of history is provided in further context at the site of the building and we encourage you to pay a visit.

Today, the remaining part of the original structure, the front facade, has been incorporated into residential and commercial development. Above the picturesque structure is a residential condominium, making for a stunning mix of old and new. 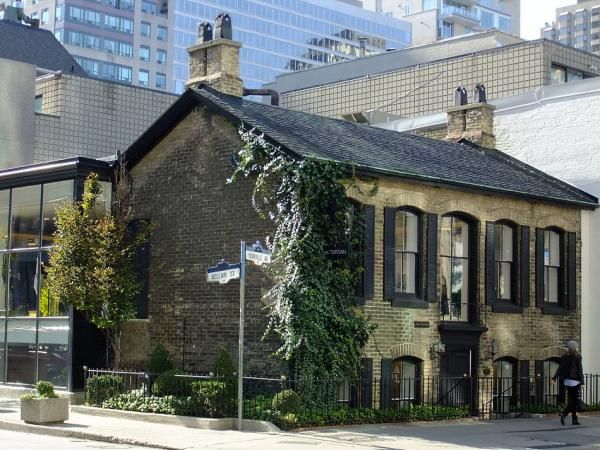 If you’re interested in a stunning display of 19th-century architecture, you’ll want to pay a visit to the flagship location of Toronto-based designer Pink Tartan. With a fascinating history, this building was originally built by a Scottish immigrant, keen on building a structure to withstand his life in the Highlands.

Years later, infamous local Sheriff John Daniels, who also happened to own a Saloon in the area, took over the house. Rumors surrounding a shed-turned-jail-cell in the backyard lend a spooky edge to this story, but you’ll have to pay a visit for the details. Aside from that, what remains is a rare example of early 1837 architecture.

Nestled at the corner of Avenue Road and Bloor Street among modern-day office towers and the ROM (an architectural wonder in itself) is the Church of the Redeemer, holding its own as a building of the Gothic Revival era. Having gone through various design and structural upgrades throughout the years, the building features naturalistic, three-dimensional stained glass, one of the oldest Casavant organs in the city (installed in 1904), and large gothic-style windows. Certainly a unique space to admire, the Church of the Redeemer provides some respite from the busier surrounding areas.

Set amongst Victorian and Edwardian brick buildings is the Heliconian Hall, which was originally built in 1876 a neighbourhood church. Designed in the unique Carpenter’s Gothic Revival style, the Heliconian Hall is one of only a few buildings of this style within Southern Ontario.

In 1990, the hall was designated as a Toronto historic site and in 2008 became a National Historic Site. The structure features a simple board and batten exterior, a Victorian rose window and carved rafters in the vast vaulted ceiling.

Since 1909 the building has served as home of the Toronto Heliconian Club (the oldest association of its kind in Canada) to give women in the arts an opportunity to meet socially and intellectually. The fantastic acoustics and performance-centered interior design provides a great space for both the club and outside performers who may rent the space. It’s certainly worth keeping your eye on performances which will give you a true inside look at this one-of-a-kind space. 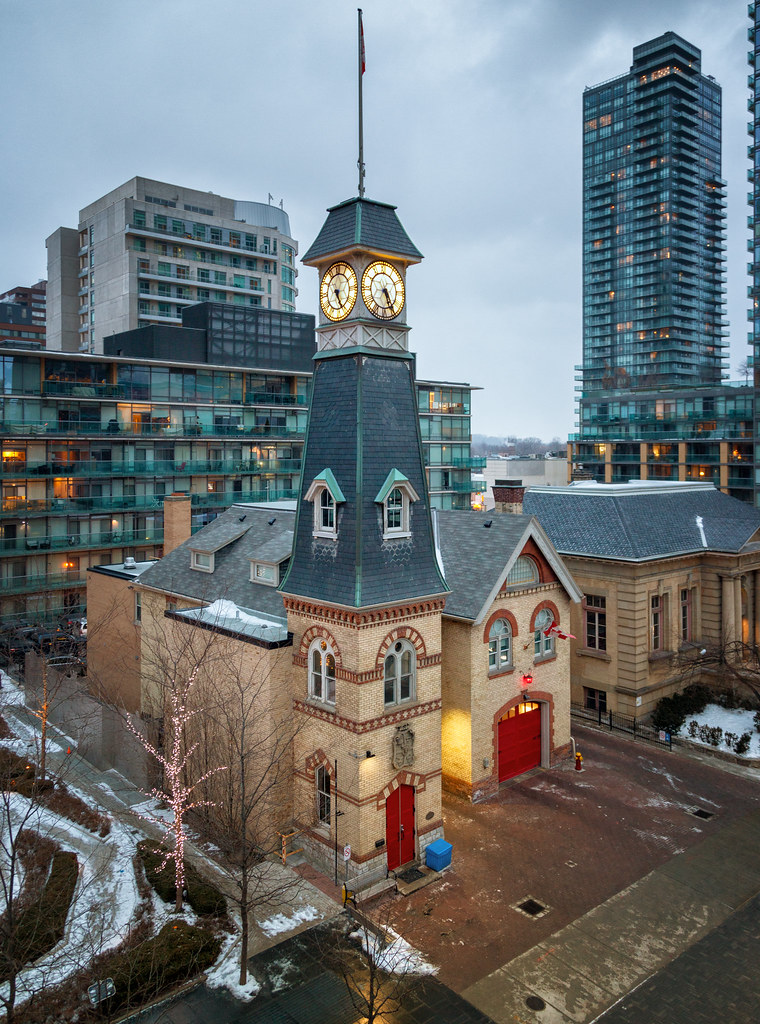 Perhaps the most charming fire hall you’ll ever encounter is none-other than #312 in Bloor-Yorkville. Originally built in 1876, the Victorian-style building stands on soft yellow brick (originally produced by Yorkville Brickyards, which is now Ramsden Park) with red accents, features a majestic clock tower, and the Yorkville Coat of Arms, which is placed outside the building. Originally, the fire warden lived in the station, a night firemas lived in a cottage in the back, and the tower was used to hang the hoses to dry. The Coat of Arms features symbols of the trades of the original council members and their initials: a blacksmith (anvil), a brewer (beer barrel), a builder (brick mould), a butcher (bull’s head), and a carpenter (jack plane).

The Fire Hall was restored in 1974, but it’s not hard to imagine its origins during a time when fires were fought via horse and buggy. Today, it functions as one of the busiest stations in the city, but retains a distinct beauty and charm (even garnering the attention of Lady Gaga who went for a tour back in 2014!). Not to be missed, this unique hall is a great place to stop by for a tour.

The Yorkville Branch opened in 1907 as the philanthropic venture of Andrew Carnegie and is one of the hundreds of “Carnegie” libraries built across North America in the early part of the century. The Yorkville branch is the oldest library in Toronto and an official heritage site. Located just east of the Fire Hall, the library was nearly demolished in 1972, but was spared thanks to the Historical Board and Toronto Library Board.

Today, the building still features the original Carnegie standards, including broad steps to the entrance, paired columns, Ohio sandstone and is finished throughout with quarter-cut oak.

PS. Looking for places to stay in Toronto?