No stranger to the arts or art galleries, Bloor-Yorkville is home to an exciting mural festival taking place from September 13th – 15th. Presented by INK Entertainment, Yorkville Murals is transforming the outdoor courtyard space at 99 Yorkville Avenue. The festival will feature works by renowned local and international artists RISK, Ben Johnston, WIA, Mr. Brainwash, Getso, Olo Volo, as well as others who will be announced before the official launch date.

While there have been individual murals released throughout the summer (and we encourage you to go check them out!), the festival will commence with a three-day celebration of artist talks, panel discussions, film screenings and pop up parties. Of course, the final murals and artist collaborations will also be revealed at this time. 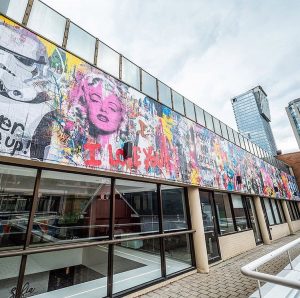 Yorkville Murals kicked-off its art initiative in early July with an original 70 by 7-foot mural created by the well-known artist, Mr. Brainwash, who designed the piece to celebrate Bloor-Yorkville’s Tagliatella Galleries one year anniversary in the neighbourhood. Mr. Brainwash is known globally and brings a great level of the excitement to the festival, creating a series of work dedicated to celebrating all things Toronto.

Learn more about a few of the featured artists below:

“For more than a decade Thierry Guetta, under his moniker, Mr. Brainwash, has been pushing the envelope of contemporary art. The orchestrated collision of street art and pop art has been his balancing act. The tipping point for Mr. Brainwash was his groundbreaking footage from the widely acclaimed documentary, Exit Through the Gift Shop. This Academy nominated film demonstrates the evolution of the street art movement with Mr. Brainwash, who, alongside Banksy, – brings the art to the masses.” – learn more

“In 1983 RISK was the first to write on highway overpasses and train cars, bringing graffiti to LA and proliferating the art form.  Pioneering crews such as WCA (West Coast Artists) and MSK (Mad Society Kings), RISK has since painted for Michael Jackson, Red Hot Chili Peppers, Bad Religion, Blink 182, and many others.  With an extensive history creating art, RISK defines what it means to be a fluid and dynamic artist.  And now, in the 21st century, RISK is bringing a taste of his works to you, via the world wide web.” – learn more 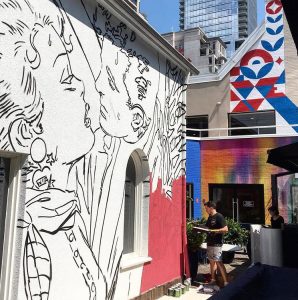 “With an undying desire to push what is possible with typography & lettering, Ben Johnston is a multi-disciplinary artist & designer that believes in a hand-crafted approach to all his design endeavors. Born in Canada and raised in South Africa, Ben brings a diverse sense of influence to his work – finding inspiration from the small cultural nuances to societal differences that he encounters throughout his travels.” – learn more

“Ola Volo (BFA, Emily Carr University) is a Canadian illustrator from Kazakhstan with a distinctive style drawn from history, multiculturalism and folklore. Her intricate works bring animals, people, architecture and nature together to articulate diverse stories rich with symbolism and elaborate forms. Ola creates winding narratives that acknowledge the subtleties of human nature while celebrating the little surprises of everyday life.” – learn more

If you would like to attend the festival, please sign-up on the official event page to receive further information and invitations.